GemCrust Wikia
Register
Don't have an account?
Sign In
Advertisement
in: Characters, A to Z, Fusion Gems,
and 12 more

Smoky Quartz is the fusion of Steven and Amethyst, and is Steven's first fusion with a Gem. They formed for the very first time in their debut episode, "Earthlings".

Smoky Quartz has three arms (one right arm and two left arms that stem from the same elbow joint, similar to Sugilite's), a dark mauve complexion, dark bushy eyebrows, and peach freckles on their cheeks and shoulders. Their hair resembles a shorter version of Amethyst's; however, it is dark brown, closely resembling Steven's hair color, along with its slight curliness. Their hair often covers their left eye. They are slightly taller than Jasper and have a large, wide build which stems from both Steven and Amethyst's bodies. They have plump lips, a small nose, and a round face.

Like Stevonnie, their outfit is a combination of the individual outfits of their components. In their case, Smoky Quartz had a pale mauve version of Amethyst's tank top with a jagged bottom under an off-shoulder tank top that resembles a stretched out version of Steven's red t-shirt with a gold star in the middle, both of which are crop tops, along with Steven's jeans, which resembled jean shorts, and Amethyst's dark mauve boots and black leggings with mauve stars on the knees. Their gemstones are embedded on their chest and navel.

Due to Amethyst's regeneration in "Change Your Mind", Smoky Quartz gets a new design. They now wear Amethyst's black top with torn holes on the chest over Steven's shirt, their leggings are gone and Steven's sleeves no longer show, their boots are now white, and their jeans are replaced by ripped shorts.

As a fusion, Smoky Quartz adopts both Steven's and Amethyst's personalities. In this case, Smoky Quartz has a proud, carefree, excited, and happy-go-lucky attitude. They are described by Rebecca Sugar as being "a big happy kid with a yo-yo". They also have a humorous and relaxed side to their personality with a tendency to make jokes even in the heat of battle. They restored some confidence to Amethyst, who had become depressed and unmotivated after being poofed at the hands of Jasper and ultimately unneeded when Stevonnie won the battle. Their humor can also be rather self-deprecating at times, as shown in the episode, "Know Your Fusion".

They are extremely confident in battle because of their cooperators' trust in one another, and as a result, they are a moderately stable fusion. However, like most fusions, they can defuse when under stress or intense emotion, as shown upon witnessing the beginning of Jasper's Corruption.

However, as shown in "Know Your Fusion", Smoky also has both of Steven and Amethyst's self-doubts added together. During Sardonyx's attempt to find a more "serious" aspect to their fighting style outside of their yo-yo weapon, Smoky was shown to lose more and more self-confidence in themself as they failed at every test thrown at them. They make statements such as "zero plus zero equals zero" and "two wrongs don't make a right. I guess I'm living proof that's true," even going so far as to call themself "one big super-wrong, good-for-nothing dud with a yo-yo."

Smoky Quartz possesses standard Gem abilities and traits, including shapeshifting, fusion, and the ability to summon a weapon.

There has been limited interaction between Peridot and Smoky Quartz, but it is shown that Peridot is very supportive in their fight, attempting to use her ferrokinesis to dislodge a piece of scrap metal to help them defeat Jasper. She also cheers Smoky on and laughs when they hit Jasper with their yo-yo. Peridot also wishes to make a giant yo-yo "meep morp" in their honor.

Due to her dislike of fighting fusions, Jasper is particularly exasperated by Smoky Quartz. Upon first seeing them, Jasper commented that fusion was the only tactic the Crystal Gems had. After realizing she could not win against them, she exclaimed that she would not lose against yet another fusion. Ironically, this incited her to fuse with a Corrupted Gem, which ultimately leads to her own Corruption. Seeing Jasper's infection upsets Smoky enough to de-fuse.

When Steven and Amethyst fuse to show Garnet and Pearl, they end up fusing into Sardonyx. Sardonyx leads them into a show in a room, made only when Sardonyx exists. In this show, Sardonyx tries to find something other than the yo-yo that Smoky Quartz can utilize, but unbeknownst to her, this causes Smoky to become nervous and upset. Once Smoky starts to insult themself harshly after failing the third test, Sardonyx realizes what she has done and de-fuses.

Garnet and Pearl were both shocked and excited when they first met Smoky Quartz. After they un-fuse in "Know Your Fusion", they eagerly ask Amethyst and Steven questions about the elements of their fusion they had chosen to demonstrate, such as the attributes of the yo-yo weapon/"toy". 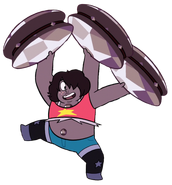 Smoky Quartz with a yo-yo (Earthlings).

Community content is available under CC-BY-SA unless otherwise noted.
Advertisement